We did not have a single photo of Variam Kunnath Kunjammad Haji, the main leader of the 1921 Malabar Rebellion, though it has been nearly a century since he was shot dead by the British.

But not any more.

A picture of the Haji, who in 1921 ousted the mighty British administration completely from Eranadu and established a native government, is now released to the public.

The photo was found by Ramees Ahmed, who was to author a movie script on the life of Haji, from the archives of a French Magazine.

Haji was  born into an affluent Muslim family sometime in the 1870s, and grew up hearing stories of the torture and injustice by the British to the locals and to his own family.

His father, Moideenkutty Haji, was deported and jailed in the Andaman Islands for his participation in a rebellion against the British. Such personal incidents, very early on in his life, played an important role in lighting the fire of vengeance inside Kunjahammed.

He was fond of traditional kapila art forms, he used to conduct Kolkkali, Daffumutt, and Katha Prasangam, and used these later to propagate his political ideas among the masses.

He was introduced to the Khilafat cause during a meeting in Manjeri by Kattilassery Muhammad Musaliyar and MP Narayana Menon, leaders of Khilafat movement and the Indian National Congress.

Haji mobilised people to take up arms. Under his leadership, they evicted the British administration from areas such as Malappuram, Manjeri, Thiruragadi and Perinthalmanna. The areas became independent of the British by 28 August 1921.

Haji declared the area including Eranad, Valluvanad and Ponnani an Independent Islamic state.

While there were allegations of the rebellion taking a communal shape, a letter Haji wrote to The Hindu newspaper proves otherwise.

“Honoured Editor, I request you to publish the following facts in your paper. According to the Press Reports from Malabar which you will have got. Hindu-Muslim Unity in Malabar has thoroughly ceased to exist. It appears that the report that Hindus are forcibly converted (by any men) is entirely untrue. Such conversions were done by the Government Party and Reserve Policemen in mufti mingling themselves with the rebels (masquerading as rebels.) Moreover, because some Hindu brethren, aiding the military, handed over to the military innocent (Moplahs) who were hiding themselves from the military, a few Hindus have been put to some trouble. Besides, the Nambudiri, who is the cause of this rising, has also similarly suffered. The Hindus are compulsorily impressed for military service. Therefore, several Hindus seek protection in my Hill. Several Moplahs, too, have sought my protection. Now the chief military commander [of the government] is causing Hindus to evacuate from these Taluks. Innocent women and children of Islam, who have done nothing and possess nothing, are not permitted to leave the place. For the last one month and a half, except for the seizure and punishment of the innocent, no purpose has been achieved. Let all the people in the world know this. Let Mahatma Gandhi and Moulana know it. If this letter is not seen published, I will ask your explanation at one time.”

Haji was later captured by the British and killed. He was sentenced to death, executed by Commander Colonel Humphrey’s firing squad.

A newspaper article from the Manchester Guardian on Tuesday, January 24, 1922 describes him as the “Moplah Rebel Chief” and the “man who would be king”: 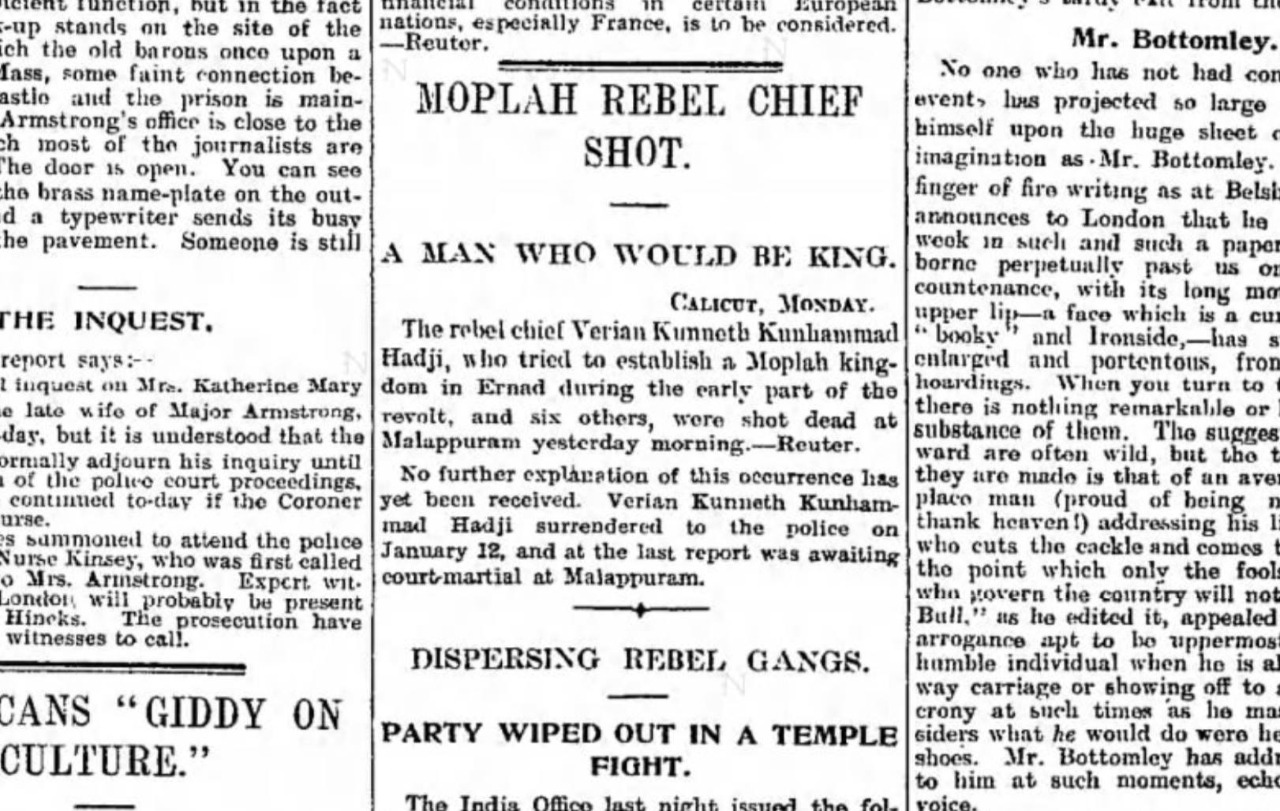 The story of a sorcerer | Arpo Unexplained

Did Islam arrive in Kerala during the time of Prophet Mohemmad?

Kerala is thought to be the place where Islam first reached in India. And unlike

When the British-Indian government awarded punishment for those who participated in the 1921 Malabar rebellion,

Poomathai Ponnamma is a well known character in Kerala folklore. Her  story is symbolic of